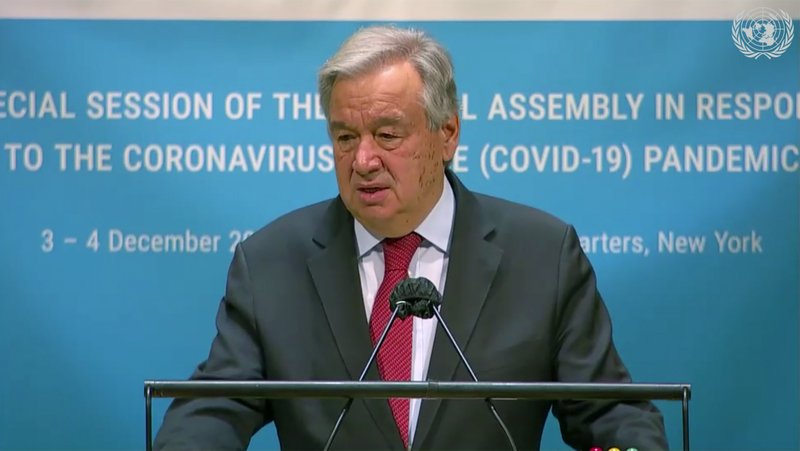 U.N. spokesman Stephane Dujarric said the secretary-general has engaged in “an active dialogue” with Ethiopian Prime Minister Abiy Ahmed, including a phone conversation on Monday, and “is very concerned about the current situation.”

Ahmed declared victory on Nov. 28 in a nearly monthlong military power struggle that exploded between his government and the heavily armed regional government in Tigray that once dominated Ethiopia’s ruling coalition. Fighting continues in some areas, and with the leaders of the Tigray People’s Liberation Front on the run in rugged territory, fears remain of a drawn-out conflict.

All humanitarian aid to the Tigray region, from medical supplies to food, has been blocked since the fighting began, to the growing distress of the humanitarian community and health experts alike. Last Wednesday, the U.N. said it had signed a deal with Ethiopia’s government to allow aid access in Tigray — but only to those areas of it under the federal government’s control.

Dujarric said Secretary-General Guterres’ call for unfettered access “implies that the agreement still needs to be fully operationalized — and we very much hope that that will happen.”

Communications and transport links remain largely severed to the region of 6 million people, so it’s difficult to know the situation on the ground, including the extent of popular support for the TPLF and the number of people killed.

The fighting has displaced almost 1 million people and strained local humanitarian services to the breaking point. More than 45,000 Tigrayans fled to Sudan, where they have taken shelter in crowded camps with no coronavirus testing or treatment facilities.

Abiy has said police will pursue leaders of the TPLF, who dominated Ethiopia’s ruling coalition before Abiy came to power in 2018 and sidelined them among the sweeping reforms that won him the Nobel Peace Prize. Abiy’s government has accused the TPLF of inciting unrest and seeking to reclaim power.

Dujarric said the U.N. is “totally committed to supporting” an African Union initiative to end the conflict, and to mobilizing humanitarian support for refugees, displaced people and all those “in distress” in Tigray.

Guterres has been conveying these messages in numerous conversations with U.N. representatives on the ground, regional leaders and prime minister Abiy, the U.N. spokesman said.

But the prime minister maintains the dispute with Tigray is internal and has rejected dialogue with TPLF leaders, including during a meeting with three high-level African Union special envoys.